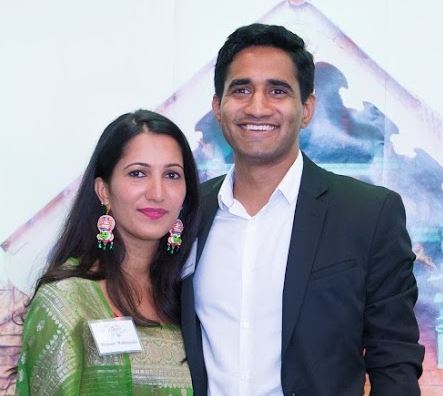 I am Mukkatira Poonam Thimmaiah, married to Mallangada Deep Somaiah. We live in New York city and are currently expecting our second child. Growing up, my family moved a lot because of my dad’s job, so my schooling was all around the country. The advantage of moving so much is that you learn to be adaptive and be able to blend into any situation and culture. I did my engineering in SJCE, Mysore and worked in Bangalore for some time before moving to America in 2007. I currently work for JP Morgan In-vestment bank as a Business Analyst for Fixed income trading desk.

I enjoy travelling because it instills an appreciation for all kinds of cultures, regions and people and gives a diverse perspective. I also enjoy surfing and creating my own jewelry during my free time. I like to have different experiences and be welcoming of divergent viewpoints as it only aids in continued growth and learning in life.

Tell us about your organization. How did it come to be?
Climb Against Sexual Abuse (CLIMB) was founded in February 2015 and focuses on empowering survivors of sexual violence, by putting an end to the social repercussions and the stigma that exists in our society today. The motivation to start this platform came after attending the One Young World Summit 2013 held in Johannesburg. The summit witnessed participation of over 1,300 delegates from 193 countries. Amanda Dufresn, spoke at the summit about her struggles with dealing with the trauma of rape and encouraged victims to speak up about the experience in order to start overcoming the mental and physical ordeal. She is recruiter at Google Boulder, she is also associated with an organization named SOAR (Speaking Out About Rape) through which she shares her survival story with people across the globe in an attempt to bring awareness and empower people to heal. Her indelible spirit inspired me and Shada Abuhattum from Israel, to do something rather than just be passive.

What activities and programs has the organization facilitated so far?
Firstly, we encourage survivors to share their stories by giving them a safe and comfortable platform. Providing a global network for support and growth by bringing together victims, survivors and professionals who can help each other is another resource. CLIMB also organizes educational outreach programs at university’s and other forums. Lastly, the mountaineering approach CLIMB uses to bring together survivors to participate in treks, symbolizes the physical and mental challenges a survivor faces. The hope is that the connection participants share will help them overcome the horrifying experience, and surmount the emotional obstacles in their lives.

We have organized more than 25 events in countries all around the world including India, South Africa, UK, America, Cameroon, Ghana, Pakistan, Israel, Ghana and more.

How does technology play into CLIMB’s programs?
Technology has played a vital role in our activities. For example, the use of SnapChat to create different avatars in order to protect underage abuse victim’s identity was vital to our climb in Mysore. It allowed the children to open up and speak out without the fear of being recognized or chastised. The journalist was able to capture their spirit and stories without jeopardizing privacy.

Technology has also helped a team of passionate volunteers from around the world to come together on WhatsApp to ensure smooth functioning of this organization. We can have an event in Cameroon with funds raised from a Kizomba dance event in London, with help of a poster designer from India and a legal person in Israel- made possible because of technology.

What motivates you to dedicate your time and energy towards awareness and sup-port?
I find it hard to explain the kind of motivation that drives me towards this issue in general. From a very young age, I felt my blood heat up in my veins at every injustice I read in the newspapers. Meeting survivors of sexual violence and rape in One Young World completely exhausted me and I was determined to do something in a small way to bring attention to this matter. This has evolved to where we are today, thanks to a team of dedicated and passionate volunteers. I realize that Sexual violence will always be there in our society but the existing rape culture, victim blaming, the taboo and fear that exists around this issue needs to be changed. Only we as a society are to be blamed for the existing culture and only we can change it.

Communities play a huge role in effectiveness of any social outreach. How do you involve communities, and what can people do to support healing process of victims?
CLIMB is dedicated to not only empowering survivors of sexual violence, but also creating awareness in the community by sharing survivor stories digitally through articles and by short videos. Unless you have been through it personally, there is a general sense

For example, India’s Chamundi climb had above 50 survivors who were largely minors, climbing along with 200 local supporter’s from the community. A few days before the climb we were looking for one of the 50 survivors would be ready to talk to give a speech about their horrific experience and tell their story to the locals before starting the climb. None of them were willing to talk, in fact they didn’t even want to be recognized in any way. Once the day came and the Climb started, they saw the support of our MP Pratap Simha and the entire community, they were so moved by it that at the end of the climb some of the girls told us that they were ready to talk. They spoke not only to the locals but told their stories in front of the cameras to the Hindustan times reporter Yusuf Omar, who captured it all in a brilliant way in this video. Since they were all minors, we were legally prohibited from disclosing their identity. This video eventually reached BBC, CBC and many other new channels but the important message to take away is how a community’s support by just turning up for an event, can trigger strength and empower survivors. And that’s exactly what people need to do- show support to survivors and empower them. Not only so we can help support them on the healing journey, but so, as a culture, we can overcome the stigma and social repercussions that exist in our society today.

What are/were your biggest operational challenges with the programs that Climb Against Sexual Abuse runs?
CLIMB is a New York 501 (c) registered not for profit. Dealing with the legal and accounting aspect of running a nonprofit has been taxing without the support of any full time employees. Fundraising has also been one of the biggest challenges in our team. We have been lucky in all our events so far to get local sponsors and support from the community.

What has been the most gratifying moment in this journey so far?
Personally, the most gratifying thing has been to see how a small idea can become a bigger mission and impact several lives. Most of the people we work with around the world are strangers, but we are all simply united by the passion we hold for eradicating this issue. People wanting to spend their free time to work towards an issue like this and to believe in what we do has definitely renewed my faith in humanity, despite overwhelming evidence to the contrary when I listen to survivor stories. Within CLIMB, there have been many such moments that we as a team have achieved. We had a climb in South Africa where three survivors of sexual abuse spoke during a climb to the Drakensberg mountain, some for the first time ever. All three become local hero’s after the climb was covered by their national media and are currently championing the cause for their community and leading the way for survivors to speak up. It’s surely a triumphant moment to see this change and hear stories of empowerment from most of our survivors.

What is the ultimate goal for Climb?
Ultimate goal would be for us to climb the Mount Everest basecamp with survivors as well as supporters from around the world. We would ideally like to get survivor from each continent to indicate this being a global issue. This was the initial idea I started with which evolved into the organization called CLIMB. We have achieved many smaller events and climbs which are helpful and effective for a particular community. In spirit of “symbolizing the physical and mental challenges that survivors face in their healing journey”, we want to bring people together to start meaningful discussions by climbing.

Message to parents, and to the youngsters.
I would definitely encourage parents to have this conversation with their kids and make sexual violence a part of your discussion at home. Talking about it will create an environment, where god forbid, if ever your child is subjected to any form of abuse, they will be comfortable enough to come and report the issue to you. Most kids don’t come out for the fear of being victim blamed when it’s considered a taboo in your surroundings.

Youngsters who have been through something traumatic talk about it, don’t hold it back and suffer issues like PTSD in silence. Talk to whoever you can find. People like Harvey Weinstein and Bill Cosby were bought down because of one person decided to tell their story. You could also talk about this issue if you haven’t been through it. Change can only begin when we raise our voice.

You can also volunteer with us. Our team is comprised of volunteers and survivors from around the world. We mainly communicate online and help each other organize events/climbs/walks etc. done at our own pace. The aim is to work whenever we get some time to build a movement against this issue that we feel so passionately about. So please reach out to us and help us change the existing rape and sexual violence culture. As friends, families, colleagues, and peers of the survivors, it is our responsibility to provide the support system that they require. What we need is a way to break the Silence on sexual violence.

What can the community do to help?
There are three things you can do to help:

If you are a survivor, mountain climber, movie maker, IT professional, marketing specialist, communications manager or just a motivated individual, you can contribute to our cause by joining our team. Email us at info@climbagainstsexualabuse.com.

You can organize a climb or an event to raise awareness in your community. Reach out to us to know more.

You can help us raise money by hosting a fundraiser or you can simply donate by visiting our website.
Sexual abuse is a horrific crime and the current situation needs to change and it’s our job to change it, it’s mine and yours. Come join the fight.